It depends on whose Bible you are talking about.

Well, it depends on whose Bible you are talking about.

If you are a mainline Protestant, that is, not Roman Catholic, your Bible is made up of two parts, the Old Testament and the New Testament.

The Old Testament is organized into four parts: the PentateuchThe Pentateuch is a Christian term the first five books of the Old Testament. These books contain stories of Israel's early history, God's covenants, and many laws such as the Ten Commandments)., the Historical Books, the Writings, and the Prophets.

One of the reasons the prophetic books are located at the end of the Old Testament is that Christians interpret these prophecies to point to the coming of Christ.

Now, if a Protestant and a Catholic are comparing Bibles, the Old Testament is where there will be differences. The Old Testament in Catholic Bibles includes what’s known as the “deuterocanonical” books, or “second” canonA canon is a general law or principle by which something is judged. The body of literature in the Old and New Testaments is accepted by most Christians as being canonical (that is, authentic and authoritative) for them. books that were thought to be just as much “scripture” as the other books. These fourteen books are interspersed throughout the Old Testament.

Protestant Bibles, if they include these books at all, will put them in a separate section in between the Old and New Testaments and call this section the ApocryphaApocrypha refers to a collection of writings that, in the judgment of a particular group, are not to be considered as part of the established, authoritative books of the Bible. Several books that Protestants consider apocryphal, such as Judith and Bel and the Dragon, appear..., which means “hidden,” or “obscured.”

When it comes to the New Testament, Christians are on the same page. The first thing to remember is that the New Testament is not ordered chronologically. In fact, the order is somewhat similar to the organization of the Jewish Scriptures.

The Gospels, which tell the story of JesusJesus is the Messiah whose life, death, and resurrection are God's saving act for humanity, are first, much like the Torah telling the story of the Israelites. Acts and the letters of PaulA Christian missionary who once persecuted the church recount the “history” of the church. That is, how the church spread out from Palestine all over the Roman EmpireThe region we today call Palestine and Israel was under Roman rule during the time of Jesus and the early church.  The Roman Empire was in its ascendancy during the first century, making it the most powerful political and military force on earth.. The third grouping of books in the New Testament can be compared to the Ketuvim, the Writings. Hebrews, the catholic epistles, and Revelation are more general writings.

MatthewA tax collector who became one of Jesus' 12 disciples comes first because when the church was putting the New Testament together it thought Matthew was the oldest Gospel. Mark comes second because people thought Mark was actually a summary of Matthew. (We now believe Mark is the oldest gospel, but church leaders like Augustine were under the erroneous belief that something gets shorter the second time you write it!). And if we are honest, it’s also probably first because it won the popularity contest. The early church loved Matthew.

After Mark comes LukeThe "beloved physician" and companion of Paul, because it is so much like the first two gospels. These three are sometime called the Synoptic GospelsThe Synoptic Gospels are Matthew, Mark, and Luke. They are called Synoptics because they view the gospel story from a similar point of view; they also share large blocks of narrative material in common., from a Greek word that means “seen together.” John, the oddball and theological heavyweight of the bunch, brings up the rear as the fourth gospel.

Acts was written by the same author as Luke but Luke and Acts are separated to include John among the four Gospels. Actually, it makes a lot of sense that Acts is placed right before Paul since it talks a lot about him any way.

Paul’s letters are next in line because, well, because he’s Paul. The letters of Paul are organized by length, which is why Romans is first. 1 Thessalonians is actually the oldest writing in the New Testament.

The last book of the Bible is Revelation, which seems an appropriate end since it seems to talk about the “end times.” Some people refer to Revelation as the ApocalypseAt its root, being derived from a Greek word meaning "unveiling," apocalypse refers to a revelation of a divine or previously unseen reality. Some ancient Jewish and Christian literature used the term to describe destruction or cataclysm. Paul describes his encounter with Jesus Christ as... because it’s the only book in the Bible that is all apocalyptic, a kind of literature that was very popular around 200 B.C.E to 100 C.E. The name of the book comes from the first word of the book in Greek, apocalypsis, which means “revelation.” In this sense, it’s a very fitting end to the Bible — 66 books that witness to God revealing God’s self over and over again. 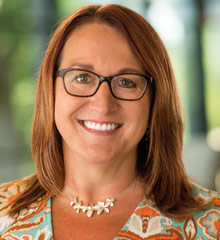 Karoline M. Lewis is the Marbury E. Anderson Chair in Biblical Preaching at Luther Seminary, St. Paul, MN, where she has taught since 2007. Lewis is the author of A Lay Preacher’s Guide: How to Craft a Faithful Sermon (2020), Embody: Five Steps to Leading With Integrity, SHE: Five Keys to Unlock the Power of Women in Ministry (including an accompanying facilitator guide, participant guide, and DVD). She was one of the 100 religious scholars in the United States to contribute to the Values and Voices Campaign. Ordained in the Evangelical Lutheran Church of America, Lewis holds degrees from Northwestern University (B.A.), Luther Seminary (M.Div.), and Emory University (Ph.D., New Testament Studies and Homiletics). She is a contributing writer for Working Preacher, co-host of the site’s weekly podcast, Sermon Brainwave, and regularly authors the Dear Working Preacher column. Visit karolinelewis.com for resources on preaching, leadership, and being a woman in ministry.
All Posts

Matthew 28:1-15 – The Resurrection of Jesus the Messiah

John 3: You Must Be Born Again

Jesus and Banquets in Luke

Icon to iPad: the Bible in American Life

Is God Affected by Our Prayers?