Since retiring in 2001 as Professor of Old Testament at Luther Seminary, James Limburg has filled in as a visiting professor of Old Testament at Pacific Lutheran Seminary, in Berkeley, California; Luther Seminary, in St. Paul, Minnesota, and United Seminary in New Brighton, Minnesota. He also continues to teach and preach at a variety of Twin Cities churches. Recent books include The Psalms (Westminster John Knox, 2000), Encountering Ecclesiastes (Eerdmans, 2006) and The Other Woman (Zion, 2006). He has also contributed to EnterTheBible.org (Luther Productions), and the Lutheran Study Bible (Augsburg). The Limburgs divide their residence in Minnesota between a home in New Brighton and a cabin on Woman Lake. 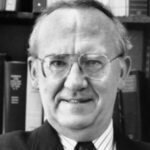 The Fear of the Lord: Proverbs

The Purpose of the Book of Proverbs

Ecclesiastes: A Book for Skeptics

Vanity: The Key Word in Ecclesiastes

The Main Message of Ecclesiastes