Alan Padgett has been on the faculty at Luther Seminary since 2001. Following a call to the ministry, he graduated from Drew University (M. Div., 1981). After serving full time in pastoral ministry he studied at the University of Oxford (D.Phil, 1990). A United Methodist minister, he coordinates Methodist studies at the seminary as well as teaching classes in systematic theology and ethics. Padgett works at the intersection of theology, biblical studies, philosophy and the sciences. His most recent books include the Blackwell Companion to Science & Christianity (co-edited with Jim Stump, 2012); Introduction to Philosophy: Christianity and the Big Questions (with Steve Wilkens, 2018); and Ecotheology: A Christian Conversation (co-edited by Kiara Jorgensen, 2020). 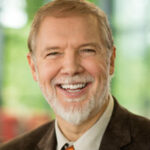 The Dry Bones of Ezekiel 37

Chariot Wheels in the Book of Ezekiel

Judgment of All the Nations in the Book of Ezekiel

Profile of the Prophet Ezekiel

The Backstory of the Book of Ezekiel

The End of Ezekiel: A Vision of God’s Presence

How the Bible Influences Ethics