The Spirit is as close to us as our nearest breath, and brings us into relationship with God and with one another.

Who is the HolyHoly is a term that originally meant set apart for the worship or service of God. While the term may refer to people, objects, time, or places, holiness in Judaism and Christianity primarily denotes the realm of the divine Spirit? We often have difficulty answering this question and perhaps are rightly suspicious of those who are only too eager with a response.

Yet the Spirit is as close to us as our nearest breath. The Hebrew word for “spirit” (ruach) means wind or breath of life — the animating power in people, animals, and even evil spirits. The same word is used for God’s life-giving presence in our lives, not just as a force but as God’s efficacious presence within and among us.

The Bible is most interested in how the Spirit — God’s life-giving presence — brings us into relationship with God and with one another. In Israel’s early stories, the Spirit comes upon leaders and kings at certain times, giving them charismatic, or compelling power to perform extraordinary feats. When DavidSecond king of Israel, David united the northern and southern kingdoms. is anointed as king, the Spirit remains with him so that he can embody and represent Israel’s special relationship with God.

The Spirit is not just a charismatic Spirit. The Spirit is also an ethical Spirit who inspires prophets to speak truth to those in power — although we should note that the “classic” pre-exilic prophets (AmosProphet to the northern kingdom who condemned Israel's oppression of the poor, calling for justice to "roll down like waters.", HoseaProphet to the northern kingdom who married a prostitute to show God's relationship to a faithless Israel, Micah, IsaiahIsaiah, son of Amoz, who prophesied in Jerusalem, is included among the prophets of the eighth century B.C.E. (along with Amos, Hosea, and Micah)--preachers who boldly proclaimed God's word of judgment against the economic, social, and religious disorders of their time., and JeremiahProphet who condemned Judah's infidelity to God, warned of Babylonian conquest, and promised a new covenant) appealed to God’s word (dabar) and not to God’s Spirit (ruach) when they spoke out against idolatry and injustice. Nonetheless, during Israel’s exile into Babylon, we find the Spirit explicitly linked with bringing justice not just to the nations, but to nature itself.

In Isaiah, the Spirit is an eschatological Spirit who will bring about a new messianic age in the line of David. Like a burning fire, the Spirit will cleanse the people of their sins, and in a final Exodus (that echoes Israel’s Exodus from Egypt) death itself will be overcome. A new creative act of God will bring about “a new heavens and a new earth” (Isa 65). Likewise, EzekielA prophet during the Babylonian exile who saw visions of God's throne-chariot, new life to dry bones, and a new Temple. describes how the Spirit will revivify dry and dead bones, infusing the people with God’s life-giving presence.

In turn, Jeremiah describes how the TorahThe Torah is the law of Moses, also known as the first five books of the Bible. To many the Torah is a combination of history, theology, and a legal or ritual guide. will be written on people’s hearts. As Joel declares centuries later, the time will come when the Spirit will fill all people — including young and old, slaves and free persons, and men and women — in a way that is direct and enduring.

THE SPIRIT’S PRESENCE IN JESUS’ LIFE

These images of the Spirit inform how the Gospels’ depict the Spirit’s presence in Jesus’ life. At his baptismJesus was baptized (literally, "dipped") in the Jordan River by John the Baptizer, at which time he was acclaimed from heaven as God's Son, the Beloved. Much later baptism became one of the sacraments of the Church, the action by which a person is incorporated..., the Spirit descends on JesusJesus is the Messiah whose life, death, and resurrection are God's saving act for humanity like a dove and a voice from heaven declares Jesus to be God’s chosen son. Echoing Isaiah, Jesus declares that the Spirit has empowered him “to bring good news to the oppressed, to bind up the brokenhearted, to proclaim liberty to the captives, and release to the prisoners” (Luke 4:18; see also Isa 61:1).

Through the Spirit, Jesus embodies the kingdom of GodThe kingdom (reign) of God is a central theme of Jesus' teaching and parables. According to Jesus this reign of God is a present reality and at the same time is yet to come. When Christians pray the Lord's Prayer, they ask that God's kingdom... in his very person. Indeed, his intimacy with God is so complete that he surrenders to God’s will for him — even to the point of godforsakenness. As his followers would later interpret, in his crucifixion Jesus takes on our death, sin, and suffering so that God’s creative justice and righteousness can be embodied in our lives.

Yet his disciples soon witness to the Spirit’s raising Jesus from the dead. They also experience the presence and power of the Spirit within and among them. The book of Acts describes how, as Jesus had promised, the Spirit descends at PentecostPentecost was originally a Jewish harvest or pilgrimage festival that fell on the fiftieth day after Passover. It was during this festival that the Holy Spirit visited Jesus' followers in tongues of fire and caused them to speak in many languages, as reported in Acts... — with tongues of fire and a multiplicity of languages. Similarly, the Gospel of John describes how Jesus promises an Advocate or Comforter, who will guide us into all truth, enabling us to be born anew as children of God with the power to forgive sins.

In his letters, Paul describes how he was propelled by the Spirit to proclaim to Gentiles the good news about what God had done through Jesus the MessiahThe Messiah was the one who, it was believed, would come to free the people of Israel from bondage and exile. In Jewish thought the Messiah is the anticipated one who will come, as prophesied by Isaiah. In Christian thought Jesus of Nazareth is identified... (or the Christ). For Paul, Jesus’ death and resurrection had inaugurated a new covenantBecause Israel had broken the old covenant, the prophet Jeremiah declared that God would establish a new covenant, one that would be written on the heart. The New Testament is often referred to as the New Covenant because Jesus came to fulfill the law and...: God’s promise of a new messianic age was now available to all people through faith in Jesus and in the Spirit’s power.

Through baptism into Christ’s death and resurrection, we too are given the same Spirit that was in Jesus — the Spirit that enabled him to have intimacy with the one he called “Abba.” Whether male or female, Jew or Greek, slave or free, we too have died to all other powers — including death, sin, and even the law — so that we can now can live out of Christ’s life, freed to be both more fully ourselves and to love and be of service to those around us.

THE SPIRIT IN OUR LIVES

The Spirit enables us to see and be transformed by the face of Christ as we see it mirrored in our own lives and in the lives of those around us.

Of course, all of this only takes place within the reality of our lives where there is no escape from suffering.  We too “groan” with the rest of creationCreation, in biblical terms, is the universe as we know or perceive it. Genesis says that in the beginning God created the heavens and the earth. In the book of Revelation (which speaks of end times) the author declares that God created all things and... in the midst of what often seems futile. Yet within that groaning — indeed, in the midst of every breath, even when we do not know how to pray — the Spirit intercedes for us with sighs too deep for words (Rom 8:26). Like a mother giving birth, the Spirit brings forth new life out of whatever it is that happening in our lives.

In the Spirit, our very bodies become conduit for the Spirit’s life-giving presence not only for ourselves but also for those around us. 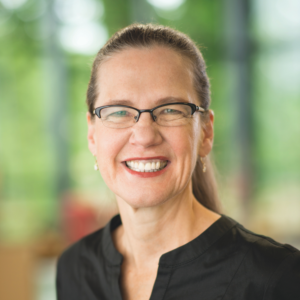 Lois Malcolm holds a Ph.D. from the University of Chicago. She has taught at Luther Seminary since 1994. Malcolm grew up in the Philippines as the daughter of missionaries. Before becoming a theologian, she received a Master of Arts in applied linguistics from the University of Minnesota. She taught linguistics and English as a second language courses in the U. S. and overseas. Her books include “Holy Spirit: Creative Power in Our Lives” (Fortress, 2009); “God;” an edited volume for “The Westminster Collection of Sources of Christian Theology” (Westminster John Knox Press, 2012); and three forthcoming books: “A Theological Commentary on Second Corinthians” for the “Belief” series (Westminster John Knox); “Sophia Cries Out in the Street: Wisdom in Christian Theology” (Minneapolis, MN: Fortress Press); and “Christian Understandings of God: The Historical Trajectory,” “The Fortress Historical Trajectories Series” (Minneapolis, MN: Fortress Press).
All Posts

The Role and Authority of the Apostles in Acts

Why Do We Suffer?