Heaven always needs a poet to describe it, since it is by nature indescribable.

What is heaven like? While I believe firmly in heaven, and I use the images of Revelation frequently in my hymns, what heaven will actually be like is beyond my imagination. If it has strained the poetic gifts and talents of two great poets, Dante and John Milton, who base their poetry on Scripture, it will be beyond my limited abilities to describe.

Yet a closer look at how John Milton depicts heaven is worth it. Milton, the greatest mind and poet in Puritan England, knew Scripture and the classic epics in their original languages. When he set out to write an epic equal to Homer, Virgil, Dante, and Edmund Spenser, his poetic predecessors and mentors, he succeeded.

His great epic poem, Paradise Lost, in which he attempted “to justify the ways of God to man” while based on Scripture, added to the images in Scripture. Scripture’s portrait of heaven, while vivid, was too brief for him to tell his story. He used the Bible and the additional musings of Christian poets — Dante, especially — to picture heaven in a way that helps the human mind to grasp some of its glory. While Milton shows the fallThe fall refers specifically to the disobedience of Adam and Eve when they listened to Satan rather than adhering to God's command not to eat the fruit from the tree. When people act contrary to God's will, they are said to fall from from grace... and the battle in heaven through St. Michael (Rev. 12:7), there is not much to go on other than the apocalyptic passage in MatthewA tax collector who became one of Jesus' 12 disciples (Matt 24).  A detailed description of the battle in heaven, the conversation of God with his son, the convivial nature of the angels — all of these details are filled in by the imaginations of the poets.

Heaven always needs a poet to describe it, since it is by nature indescribable. The Revelation of St. John, with its rapturous images and sounds, is mostly about the glorious worship of heaven and the saints, although the troubling verse about war breaking out in heaven is rather unsettling. Music is a dominant feature of the place, as is light. We see the saints dressed in white robes, the lamb, the city, the crystal stream, the living tree, and hear the choirs. There is the strange woman of Revelation 12 and we see her representing the history of the faith as lived on earth and heaven, but Milton is more interested in the drama of salvationSalvation can mean saved from something (deliverance) or for something (redemption). Paul preached that salvation comes through the death of Christ on the cross which redeemed sinners from death and for a grace-filled life., justifying the ways of God to humanity. His problem is that he needs time in a place where time in no more, because he is telling a story. Drama needs characters and action, in other words a plot in time, and in Scripture heaven is the end and beginning of a new and different life. So Milton has to do some inventing.

Since the epic begins just after Satan’s rebellion when the demons are facing the consequences of their actions, we experience first the smoky dark ruins of hell where they are consoling themselves after their rebellion against “heaven’s tyranny.” Only in Book III of Paradise Lost do we see heaven and God’s glory, which seems a glorious but oddly cold and inaccessible light. While it seems much to be preferred over the dens of hell, something we sinners actually prefer, the pure ineffable light of heaven is too dazzling for our senses. Critics like William Blake have noted this, saying that because Milton presents a devil and hell that we consider more attractive than heaven he is of “the devil’s party.” Others will say that Milton failed simply because heaven is just harder to write convincingly about — after all, who wants to be in an eternal church service, no matter how good the choirs?

Milton, of course, is no fool. The fact that we are somewhat put off by heaven and God’s glory is exactly right. We are sinners and “hate the light.” In fact, the great critic Stanley Fish in his book Surprised by Sin argued that Milton’s project is very simply one of “intangling us” in our sinful ways even as he teaches us the way out. So readers fall for the seductive ministrations of Satan while fleeing the pure light of logic they find in heaven. They naturally react favorably to Satan’s demonic rhetoric and persuasions because they are fallen. To hear God say, for example, in his conversations with the Son, that human beings are “ingrates” puts off the sinner because it feels like God is sneering at sinners, although Milton would argue that in heaven there is no need for persuasion, all that is needed is just the pure truth. This puts us off, at the same time shows us we are indeed fallen creatures whose senses and wills are deeply skewed and incomplete.

Milton does portray heaven with great beauty; with redeemed wits we may long for it and find it beautiful, but even he needs to summon a new muse, the HolyHoly is a term that originally meant set apart for the worship or service of God. While the term may refer to people, objects, time, or places, holiness in Judaism and Christianity primarily denotes the realm of the divine Spirit, to sing of this new place, where God “sits/High thron’d above all highth, bent down his eye/His own works and their works at once to view: About him all the Sanctities of heaven/Stood thick as stars, and from his sight receiv’d/Beatitude past utterance…” (Book III, Paradise Lost).

So what is heaven like? I will never forget a chapel service at Luther College (Decorah, Iowa) from long ago by Richard Ylvisaker in which he wondered what heaven would be like, what our resurrected bodies would be like. Ylvisaker, a professor of philosophy, took it all extremely seriously and filled his listeners’ hearts with wonder at the resurrection and heaven. This last act is not, by Christian accounting, really the last; it is a glorious beginning to what we cannot say, but only glimpse, in Scripture. 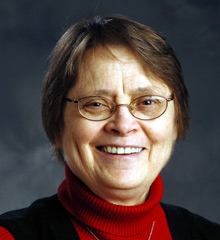 Gracia Grindal is a professor emeritus of rhetoric at Luther Seminary. Her books include: A Revelry of Harvest (Writers Showcase Press, 2002), Hymns Of Grace (Sing The Faith Bible Study Series, 2002); We are one in Christ (1997); Speaking of God (ALCW supplementary study, 1986); Scandinavian Folksongs (1984); Singing the Story (1983); Sketches Against the Dark (1982); and Pulpit Rock (1976). She also has published many articles on the history of Scandinavian-American Lutheran hymnody, and the women of the Norwegian-American Lutheran churches. In addition, her hymns and hymn translations are published in hymnals of several mainline churches, including Episcopalian, Lutheran, Mennonite, Methodist and Presbyterian. She is currently working on a study of the parsonage traditions of Lutherans in America, specifically the Scandinavian Lutheran parsonage.
All Posts

The Significance of Elijah

4.04: What does the bible say about the rapture?

Revelation: Is the End Near?

Why Do Faithful Christians Come to Different Conclusions?