The Bible and Justice

From the very beginning of the Bible, we are reminded that God is both just and generous. God provides for God’s good Creation and God reminds us that we know as we are known.

It is difficult to write a short piece about a term like “justice” in the Bible, because the concept is at once so central to the entire Bible, and yet so far from our contemporary understandings of that term.

We have to start with the fundamental heartbeat of the biblical text, a thrum which underlines our relationship with a living God who continues to reveal Godself to a world hungry for love amidst deep brokenness. From the very beginning of the Bible, in the Genesis texts where God creates the world and all that is within it, we are reminded that God is both just and generous. God provides for God’s good CreationCreation, in biblical terms, is the universe as we know or perceive it. Genesis says that in the beginning God created the heavens and the earth. In the book of Revelation (which speaks of end times) the author declares that God created all things and... and God reminds us that we know as we are known.

When God’s people step out of that relationship, seek to deny or break it, God responds. God intervenes on behalf of God’s people in Egypt — and once again intervenes when in the wilderness God’s people turn away from him. God rescues NoahBuilt the ark in which his family and the animals were saved from a flood, God rescues the people of Nineveh, God sends prophets one after another to recall God’s people to the fundamental relationship we are to enjoy with God, and thus with each other.

There is no one word in the Bible which easily translates into “justice” in English. There are three, in particular, that appear in multiple biblical texts associated with justice: sedaqah, mishpat and shalom.

Sedaqah can also be translated as “righteousness” and here we must notice how “right” combines with “relationship.” This not “judgmentalism,” this is not about determining who is right and who is wrong. That is God’s work and God’s alone. Instead it is about orienting ourselves towards the whole community.

Here shalom enters the discussion, for shalom is the peace that comes with justice. Justice in this deep and holistic sense is about restoring to community, putting things right, repairing and healing our relationships with each other. Surely there is recognition of wrongdoing, and a call for repentance and forgiveness, but both lead to healing and repair.

Mishpat is a word which lays claim to the fundamental wholeness of the world, and to what God does when that wholeness is ripped apart, torn by neglect or violence or any violation of right relationship. We might speak here of “rectifying” justice or “restorative” justice. God intervenes to restore right relationship, pursuing mishpat to bring God’s people back to God.

Perhaps one way to see these closely connected words is to notice that they form a tensive whole, one word (sedaqah) envisions the whole community in deep relationality and calls us to God’s vision for God’s good Creation, another one (mishpat) expresses the consequences God promises to bring to anyone and anything hurting that wholeness and the third (shalom) reminds us that the fruit of being in right relationship is deep peace.

Consider the ways these words so often appear together in biblical texts:

PsalmA psalm is a song of praise. In the Old Testament 150 psalms comprise the psalter, although some of the psalms are laments and thanksgivings. In the New Testament early Christians gathered to sing psalms and hymns and spiritual songs. 33:5
He loves justice and right (sedaqah and mishpat)
of the kindness of the LORD (hesed YHWH) the earth is full.

IsaiahIsaiah, son of Amoz, who prophesied in Jerusalem, is included among the prophets of the eighth century B.C.E. (along with Amos, Hosea, and Micah)--preachers who boldly proclaimed God's word of judgment against the economic, social, and religious disorders of their time. 1:17
Learn to do good, make justice (mishpat) your aim:
redress the wronged; hear the orphans’s plea, defend the widowA widow is a woman whose spouse has died, often plunging her into poverty and putting her in a vulnerable position in society. Jesus, in his concern for the poor, regards widows with compassion and concern.

Zephaniah 2:3
Seek the Lord, all you humble of the earth,
who have observed his law (mishpat).
Seek justice (sedeq), seek humility

Micah 6:8
You have been told, O man, what is good,
and what the Lord requires of you
Only to do the right (mishpat)
and to love goodness (hesed)
and to walk humbly with your God.

Throughout the Psalms and Prophets, in particular, these words appear over and over again, testifying to God’s deep relationship with God’s people, a relationship which puts primary emphasis on those who are most vulnerable: the widow, the orphan, the poor ones, the stranger. We are continually reminded that God intervenes on behalf of the lowly.

Indeed, when the New Testament writers draw on these texts they help us to hear the echoes of this God of relationship – a God so deeply and intimately connected to God’s people that God pours Godself out, becoming human in that most vulnerable of human beings, an infant, that we might yet again see how God’s justice comes alive in the midst of our brokenness, not in a declaration of power and might. The Magnificat in LukeThe "beloved physician" and companion of Paul 1:46-55, for instance, draws deeply on the Song of Hannah in 1 SamuelThe judge who anointed the first two kings of Israel 2:1-10, and once again reminds us that God has “thrown down the rulers from their thrones, but lifted up the lowly. The hungry he has filled with good things; the rich he has sent away empty.”

That is perhaps the most difficult element of this term to engage in our current contexts. In far too many of our 21st century worlds, “justice” is associated with “fairness.” That is, it is heard as a thin and particularly self-centered version of “I get what is coming to me” or worse yet, “you get what is coming to you as punishment for what you have done to me.” “Justice” in this use is a code word for revenge. Consider how we often speak of “the criminal justice system,” a system which has evolved to have virtually nothing to do with restoring to full relationship, and almost everything to do with punishment.

It is important to place our focus where God has placed it — on the deep relationship into which God has drawn us. God’s justice is beyond what we can fathom, we can only lean into the depth and breadth of God’s love and allow it to draw us into a full-bodied recognition of God’s love for God’s people, for the wholeness of Creation and thus for our intimate relationship one with each other.

For more on these topics, you can find particularly powerful essays here: 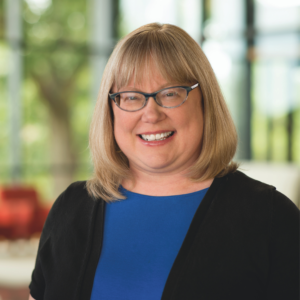 Mary Hess joined the Luther Seminary faculty in July of 2000. Hess received her B.A. degree in American Studies in 1985 from Yale University in New Haven, Conn. She received her M.T.S. degree in 1992 from Harvard University in Cambridge, Mass. In 1998, she received her Ph.D. in religion and education from Boston College in Chestnut Hill, Mass. Hess’ most recent professional experience includes serving on the editorial board of the premier journal in her field, Religious Education (1999-present), working with the Lexington Seminar and the Wabash Center, and serving as a core member of the International Study Commission on Media, Religion and Culture. She is a member of the Religious Education Association, the American Academy of Religion, and the Catholic Theological Society of America. Her most recent publications include the books: Teaching Reflectively in Theological Contexts: Promises and contradictions (Melbourne, FL: Krieger, 2008), and Engaging technology in theological education: All that we can’t leave behind, (New York: Rowman Littlefield 2005). She maintains her own website and has written her weblog, Tensegrities, since 2003.
All Posts

1.18: Was Isaiah Thinking about Jesus?

Be Where God Needs Me