Icon to iPad: the Bible in American Life

Has the possible loss of the Bible’s material presence in people’s lives had any impact on their attitudes toward the authority of the Bible itself?

When I was in college I knew guys who spent their summers going door-to-door in the South, selling Bibles and other related books. They told me that by far and away their best seller (and biggest profit) was a huge, hulking family Bible the size of a small car. This edition of the Bible had everything: an ornate, gilded and embossed cover, plenty of color illustrations, dictionaries and glossaries, and enough blank genealogical space to trace one’s family back to AdamThe first man God created. More. There was also a Roman Catholic version with plenty of pictures of Mary and the saints. When I was a parish pastor, I saw any number of these kinds of Bibles, prominently displayed on living room coffee tables, well dusted but almost certainly never read.

There were also the fancy editions of the Bible in expensive black leather, embossed with the owner’s name, carried about as a symbol of one’s own personal piety for the world to see (and approve).

It is very clear that these versions of the printed Bible were and are a kind of icon (in the religious, not the electronic, sense). They functioned as a symbol, not only suggesting the religiosity of the owners, but the veneration that they had for the Bible itself. That coffee table in the living room was a kind of shrine, a shrine to the Bible and its authority, and its central presence in the life of that family.

Now, studies have repeatedly shown that while Americans do largely give the Bible a prominent authority in their lives, they also show that Americans are rather biblically illiterate. That is, they ascribe power and authority to the text as a book, even while knowing very little about its contents. It is very easy, then, to criticize the biblical illiteracy of the average person, and suggest that people are treating the Bible as a kind of religious talisman or icon without really gaining the benefits of its insights into the God of the Bible, and the will of that God for our lives.

The trend in recent decades has been to “democratize” and “demystify” the Bible as a book, and to reduce the barriers to “entering” it (hence this website, EntertheBible.org!). Physically, this means presenting the biblical text in ways that seem less intimidating, such as Bibles in inexpensive paperback versions with denim covers, or brightly colored children’s editions.

The Bible is packaged in a huge variety of printed versions, catering to almost any type of niche market you might care to mention. With the advent of digital communication, the Bible is now available in a plethora of electronic versions and delivery systems: on websites, in ebooks, and even as podcasts and tweets that you can receive on your favorite devices. In an attempt to keep up with the times, and to make it more accessible to the masses, the Bible has, it seems, gone from “icon to iPad.”

Time will only tell if this modern shift has resulted in a corresponding increase in biblical literacy or awareness; if making the text of the Bible less iconic and less mystifying has in any way made the contents of the Bible more accessible to the average person. I wonder, however, what effects this shift might have had on people’s relation to the material presence of the Bible in their lives, and their understandings of its possible authority in personal and corporate situations. Simply put, has the possible loss of the Bible’s material presence in people’s lives had any impact on their attitudes toward the authority of the Bible itself?

For all the obvious downsides of the “Bible as material icon,” this physical presence did say something about people’s attitudes as to the authority and the holiness of the text itself. The Bible still is (for many) the Word of God — a book unlike any other book, as it contains the direct revelation of God that is authoritative for people’s lives. The Bible contains its own sense of reverence, and people express this physically by the material “packaging” of the Bibles that they own. There are obvious shortcomings to this approach, but we shouldn’t overlook its positive advantages, either.

In the age of electronic communication, how does the physical presence of the biblical text in its many electronic forms affect the authority and even the reverence one might have for the contents of the Bible? What happens to the sense of the abiding authority of the Bible, when its words disappear like so much electronic ephemera — dissipating electrons — when we power down our devices, or delete our tweets? Does the text of the Bible have any perceived permanence in such a situation?

These could be dismissed as the concerns of a contrarian. But think about this: in the Christian tradition we have spent centuries, even millennia, building up the physical presence and corresponding authority of the Bible itself. We must pay equal attention to the physical, material presence of the Bible now in an electronic age, because this book with its wisdomWisdom encompasses the qualities of experience, knowledge, and good judgment.  The Old Testament book of Proverbs, which sometimes invokes a Woman as the personification of Wisdom, is a collection of aphorisms and moral teachings. Along with other biblical passages, it teaches, "The fear of the... More is not just like any other book; it has power and authority, and its words give life. How do we express this in an electronic age? 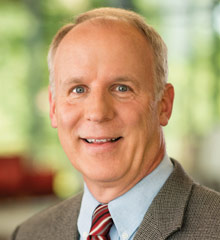 Mark A. Granquist is Professor of the History of Christianity at Luther Seminary, a position he has held since 2007. A 1979 graduate of St Olaf College, Granquist received his M.Div. from Yale University Divinity School in 1984, and his Ph.D. degree from the University of Chicago Divinity School in 1992. He serves as editor of the Luther Seminary journal “Word & World,” as editor of the “Journal of the Lutheran Historical Conference,” and has been active with the journal “Lutheran Quarterly.” His publications include “Lutherans in America: A New History” (Fortress, 2014), “Scandinavian Pietists: Spiritual Writings from 19th-century Norway, Denmark, Sweden, and Finland” (Classics of Western Spirituality, 2015), and “The Augustana Story: Shaping Lutheran Identity in North America” (Fortress, 2008). He is one of the editors of the “Dictionary of Luther and the Lutheran Traditions” (Baker Academic, 2017) and the author of many book chapters, articles and essays, especially on the history of Lutherans in North America.
All Posts

Lamentations 2:20-22 – Consider What You Are Permitting–and Doing!

Mind of Christ: Book of Philippians

Why Are There Chapter and Verse Numbers in the Bible?