God’s covenant with us is never ending and life changing

All my life I have known sacredness. Our Native Indian, Oglala Sioux culture raises each of us to know and understand that all things are the works of God the Father (Ateyape), God the Son (Cinhinktu) and God the Holy Spirit (WoniyaWakan). The WakanTanka, Great Holy Spirit, is present in every thing, every act, every instance of life and we should be attentive to this Divine presence.

The presence of WakanTanka (God/creator/Word/3) and one’s consciousness of it is, in our Christ centered world, “living in the moment”. This presence is called Taku Skanskan (“God causes everything that falls to fall”), everything that moves to move, everything that rises to rise. God causes all creationCreation, in biblical terms, is the universe as we know or perceive it. Genesis says that in the beginning God created the heavens and the earth. In the book of Revelation (which speaks of end times) the author declares that God created all things and... to be and we find him in the sky looking toward us—God’s presence is everywhere. As Native Indian people this is how we live in our conscious and unconscious day-to-day lives.

Genesis 9 tells us about God’s covenantA covenant is a promise or agreement. In the Bible the promises made between God and God's people are known as covenants; they state or imply a relationship of commitment and obedience. with the people and all of creation by bringing the presence (Taku Skanskan) of the rainbow (Mniniza: wavy and IyoYape: bright) in the clouds (Mahpiya) as the Wakan (Divine/Holy) sign of God’s love.

My life’s journey brings the Gospel alive in many ways. As a young pastor-developer in ministry with university students and ex-offenders who joined us from a local private prison, and homeless and ecumenical congregants and Native Indian people of their traditional faith, my challenges were many.

On one occasion at a Saturday evening worship at Woyatan Lutheran Church, Rapid City, South Dakota, we began to hear a beautiful male voice singing along with the 200 or so gathered as we sang old and tried hymns. People looked around to see who had that beautiful voice. As the distribution of the sacraments was completed, our piano player began to play another hymn while I and my assistant (a young woman ex-offender) removed the bread and wine. This however, we did not do because I realized that the voice was coming from the outside of the sanctuary and motioned for her to follow me out of the exit door with the Sacraments.

As we walked outside to the darkened garden, I noticed that the man was not standing next to the windows but instead was seated on a bench across the way. I walked across the lawn toward him, noticing that he was in an argument with someone but there was not another person present. My assistant followed me carrying the chalice as we quietly approached the man. He saw us and held up his hand indicating that we should stop as he said, “STOP.”

He then asked, “What is that?”

I said, “Yes, it is. It is for everyone.”  The man then held out his hands to receive the bread/Body of Christ. I thought then that it would be okay if he just received the Bread, so I turned to walk away but he said, “STOP, what is that?” as he pointed at the chalice.

And he stood, towering over me, and received the wine, made the sign of the Cross and sat down and resumed his argument. As my assistant and I re-entered the church it was very silent, and the people were looking confused because they couldn’t see me. They didn’t know where we had gone, but they had heard my words as I replied to the man in the garden.

This was one of those Christ-centered, life-changing ministry moments for not only me but for all those in attendance at worship that Saturday night. (Note: The man in the garden was a member of a biker group that was passing through to Sturgis and who seemed to have been having a difficult time. In his memory was his relationship with Christ—a covenant that he may or may not have had a full understanding of.)

And God said, “This is the sign of the covenant I am making between me and you and every living creature with you, a covenant for all generations to come … Whenever the rainbow appears in the clouds, I will see it and remember the everlasting covenant between God and all living creatures of every kind on the earth.”

God was talking about never again destroying the earth and all of creation that lived upon it but it is important to know that God’s covenant (Wiwahokciyape) with us is never ending and life changing. Always present. This is the message that I leave with you. 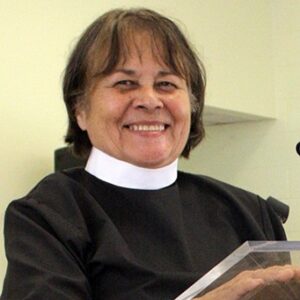 Pastor Joann Conroy is an enrolled member of the Oglala Sioux Tribe of South Dakota. She is a graduate of Luther Seminary; an ordained pastor in the Evangelical Lutheran Church in America (ELCA); President of the American Indian and Alaska Native Lutheran Association (ELCA); Chaplain at the Good Samaritan Society Center in Maplewood, Minnesota; Board member of the National Lutheran Campus Ministry Association; Saint Paul Area Synod (SPAS) Anti-Racism and Multicultural (ARM) work group; Board of Director for the Vesper Society; Member, ELCA Ad-Hoc Committee for Ecumenical and Inter-Religious relations; Member, Minnesota Multifaith Network; and mother of two very successful children and an unabashedly proud grandmother!
All Posts

Joseph’s Forgiveness of His Brothers

3.8: Why not throw out parts of the Bible that are troubling, like Genesis 22?