A favorite text of Eric Barreto in all of Scripture is a strange little story about a lonely road, a deacon named Philip, and an Ethiopian eunuch.

Have you ever found yourself at a strange point in life and wondered how you got there? Have you looked back at the coincidences and happenstance that brought you together with others in a particular place and time? That feeling of gratitude for God’s careful direction is one of the reasons that one my favorite texts in all of Scripture is a strange little story about a lonely road, a deacon"Deacon" originally meant "one who serves" or "ministers." In the early church deacons served in leadership roles; later they became a specific rank of clergy. Today some churches ordain deacons while others commission them to serve in specific ways such as worship, pastoral care, and... named Philip, and an Ethiopian eunuchAn eunuch is a castrated male, often in the service of a person in power. While the Bible mentions eunuchs many times, the most memorable eunuch is the one who was baptized by Philip in Acts 8..

And let’s be clear: this is a strange story. This isn’t a story we tend to read much in church. If we did so, it might force us to explain all sorts of things that might make us uncomfortable. Eunuchs, for one, are usually not common conversations for a sermon or over dinner. Plus, we don’t have any of the biblical celebrities in this story. Sure, Philip shows up a few times in Acts but isn’t exactly a “leading man.” It’s like going to a movie expecting to see George Clooney and getting stuck with AdamThe first man God created. Sandler.

Then again, Philip wasn’t exactly “cast” for this exact role. If we go back to Acts 6, we learn that the early church was divided. A group called the Hebrews was debating with a group called the HellenistsHellenists were people of the ancient world who spoke Greek and embraced Greek cultural ideals. Some of these ideals were contrary to Christian belief; but some were consistent with and even contributed to Christian thought. about the dispensation of food for widows. This was a church that shared everything they had and thus did not have a needy person in their midst. For the most part, at least. Some of the widows are being neglected. So the disciples gather and select twelve men to be “deacons.” The disciples give them a very specific and important but very narrow job description: wait on the tables to ensure everyone is fed equitably. That’s it. They have one thing to do and that’s it. Philip was on this short list of deacons but finds himself drawn by God to go beyond the narrow job description the church had given him.

Philip’s presence is not the only strange part of this story. There is another protagonist in this tale: a traveling Ethiopian eunuch. If we read carefully, we’ll notice something striking about this nameless Ethiopian. He is an extraordinary person. His description points to an individual of great means and education. He is literate and wealthy enough to own what would have been an expensive scroll of IsaiahIsaiah, son of Amoz, who prophesied in Jerusalem, is included among the prophets of the eighth century B.C.E. (along with Amos, Hosea, and Micah)--preachers who boldly proclaimed God's word of judgment against the economic, social, and religious disorders of their time.. He has chosen to take a very long and potentially dangerous trip from his homeland to Jerusalem. Not only that but he owns a chariot and is wealthy enough to be driven in this chariot. Even in the ancient world, distracted driving is not advisable. Do not text while driving a chariot! In short, he is a person of great power in the Ethiopian kingdom.

Equally strange is where this story occurs. The angel instructs Philip to go to the middle of nowhere in essence. Remember, roads in antiquity could be dangerous and lonely places. But without any questions, Philip heads out and miraculously finds there a distinguished chariot. Urged by God, Philip runs alongside the chariot and asks a bold question: “Do you understand what you are reading?”

Can you imagine the scene? A lone stranger jogging by your chariot breathlessly asking you such an audacious question. How would the Ethiopian in the comfort of his chauffeured chariot react to this bold even rude question? How quickly would such a powerful and highly educated individual dismiss this deluded interloper?

And yet the Ethiopian responds, “How can I, unless someone guides me?” People of means, power, and education are not accustomed to asking for help and even less accustomed to taking advice from some random stranger in the middle of nowhere.

This isn’t the last question the Ethiopian will ask. After hearing the good news, the Ethiopian wonders, “What is to prevent me from being baptized?” But notice, the Ethiopian asks the question in v. 36. What verse should come next? Verse 37 of course! Instead, we jump in our text to v. 38 where we learn that the Ethiopian was baptized.

This is yet another wrinkle in this strange story.

If you have a study Bible, a footnote will reproduce v. 37 but note that it is only found in a few manuscripts. What does v. 37 say? It contains what some ancient readers and scribes thought was a missing piece to this story. It contains the centurion’s confession of faith. After all, how can he be baptized if he doesn’t confess his faith?

At some point, some in the church decided that there was just one thing that prevented this Ethiopian eunuch from being baptized; he first had to confess! He had to say the “right” words, pray the “right” prayer.

At some point, God will call us to places we never expected. Or God may call us to turn to a stranger and ask for their help, to say, “How can I unless someone guides me?” And if we do so, if we follow God’s call to strange places in the middle of nowhere, we may find that God has already visited these strange places, that God has already set the stage, that God has made nowhere God’s home. We may find that the bold steps we take were paved by none other than the God who moves where we least expect God to move.

And so I carry this strange little story with me wherever I go, expecting that when I least expect it, God will show up. 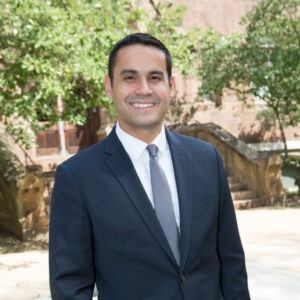 The Holy Spirit in Acts

Is God Affected by Our Prayers?

How the Book of Job Changed My Life