Transition points are laden with meaning, especially when they crop up out of the blue in Scripture, and in our own lives.

We begin at the end. I just finished a book with this as a title, and it resonates with me as I think about faith and change. Endings and beginnings. Every ending means change, and every ending is a new beginning. Late summer is a time full of change for many people—especially families with kids in school or college, the people who love them, and those who work with them. It is a time of endings and beginnings. It is often time for leaps of faith—sometimes wrapped in fear and grief. Let’s take a peek at scripture to see how God is present for endings and beginnings.

Gather your people together: snuggled on the couch, around a table, on Facetime, or in a Zoom room and light a candle or two. Share God’s story and your own stories about endings and beginnings. Testify to the presence or absence of God during those times. I always enjoy exploring more than one version of each story and encourage you to do the same—read it from your favorite Bible and a children’s story Bible. Listen to a song or watch a YouTube video (I’ve included several). Engage in the ways that work best for you.

The story of the Exodus is long and dramatic, full of twists and turns. At the point in the story when God’s people are released by the Egyptian Pharaoh and are finally free after years of slavery and oppression, they head out into the desert with MosesProphet who led Israel out of Egypt to the Promised Land and received the law at Sinai leading them. God opted for the long way to Canaan—through the Red Sea—instead of the most direct route along the southern shore of the Mediterranean Sea so they would be safe from an attack by the Philistines. God showed up every day as a pillar of cloud, and every night as a pillar of fire and provided a way through the Red Sea. And God’s people began walking together as free people into an unknown future, with many endings and beginnings ahead of them.

The valley of the shadow of death: Psalm 23

When I was 21, my fresh, new, marriage of three months ended when my beloved Michael died from carbon monoxide poisoning in a terrible accident. Talk about an ending of everything. We were both seniors in college and had big plans for our life together. Gone. In an instant. On the afternoon of his funeral, my friend sat with me and asked if I felt like I was walking in the valley of the shadow of death. I answered, “yes,” and he said something I will never, ever forget. He said, the only way you can see a shadow is if there is light behind you. Light behind me—there was light behind me. I clung to this image during my darkest, shadowiest days, and imagined God with me, showing the way to begin again. Even the most terrible, traumatic, unimaginable ending has a beginning.

I love that angels show up all over the Bible, and they almost always start their spiel with these words: “Do not be afraid!” Mmmm—okay. I’m thinking I would still be terrified if an angel showed up with a message from God for me.

Luke’s gospel starts off with a bang—the angel, Gabriel, shows up twice in a month. His first message is for old Zechariah and his barren wife, Elizabeth—and his second message is for Mary. In both instances, Gabriel starts his encounter by saying, “Do not be afraid.” Then Gabriel proceeds to tell them they will have baby boys who will change the world. For Zechariah and his wife ElizabethMother of John the Baptist this means the end of a lifetime of infertility. For Mary, this means the end of a “normal” engagement to her fiancé, Joseph. For Zechariah, Elizabeth, and Mary this is the beginning of lives they never imagined, and they are grateful.

Angels, We Have Heard on High

Who is going through endings or beginnings in your sphere of influence? You might share this Bible study with them.

Arlene Flancher is passionate about listening deeply to the voices of all children, and works at Luther Seminary on the Stewardship Leaders Team and the Children, Youth, and Family team.
All Posts 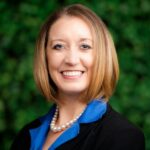