Amy Marga has been at Luther since 2006. A summa cum laude graduate of Concordia University, St Paul, MN (1995), she received a Master of Divinity (1998) and Doctor of Philosophy (2006) from Princeton Theological Seminary. She is the author of Karl Barth’s Dialogue with Catholicism in Göttingen and Münster (2010), the translator of Karl Barth’s The Word of God and Theology (2011), and a contributing translator to Barth in Conversation: Volume 1, 1959-1962 (2017). Marga is a trained racial justice facilitator through the Minneapolis YWCA and teaches a course on Race and Protestantism at Luther Seminary. She enjoys speaking on feminism, gender, race, and the Christian tradition in local congregations. She lives in St. Paul with her husband, two boys, and a poodle. 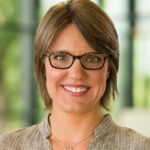 What Motherly Images for God Are in the Bible?

The Bible on Sexuality and Marriage